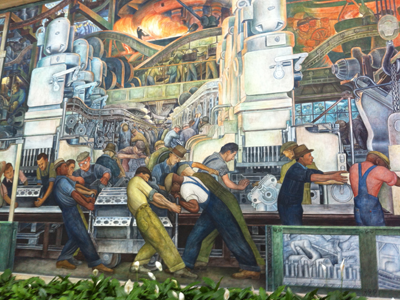 The Detroit Industry Murals (1932-1933) are a series of frescoes by the Mexican artist Diego Rivera, consisting of 27 panels depicting industry at the Ford Motor Company and in Detroit. Painted between 1932 and 1933, they were considered by Rivera to be his most successful work.
The two main panels on the north and south walls depict laborers working at Ford Motor Company's River Rouge Plant. Other panels depict advances made in various scientific fields, such as medicine and new technology. The series of murals, taken as a whole, expresses the idea that all actions and ideas are one. Presented by DIA staff, come learn the complex and intriguing story behind Diego Rivera and his Detroit Industry murals which have now been declared a National Historic Landmark.
Please click HERE to register!